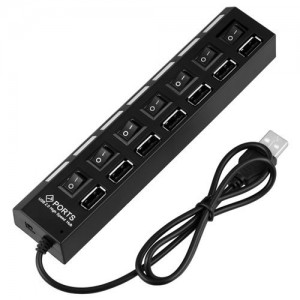 Here is a nice little 7 port USB hub for a great price.  Shop around at your local electronic retailer and you are sure to pay triple or more for a similar unit.

Yes, this IS USB 2.0 so for you people in the know, that means you can transfer data at much faster speeds if you have USB 2.0 on your computer as well.  Faster as in up to 40 times faster.

One thing I thought was kind of different was having an on/off switch for each port.  I’m not entirely sure how or why this would be useful in the real world, but since it’s included, I would probably give it a try.  Oh, and before I forget, each port has an LED indicator light letting you know that the port is in use.

Since it is USB, it should run on any platform – Windows XP and up, Mac OS ??, Linux, etc.


This 7-Port USB hub looks and works like a boss! It comes with 7 ports, 3 more than the usual 4 port hubs, for the same price as a 4 port hub; I only paid 5 dollars total. And what make this hub even better is that it features on/off switches for each individual port, allowing you to shut off what you don’t need at the time without removing the USB device. This product also features blue led lights to indicate whether a port is on or off; for those who may be worried if they are too bright, they are not, rather they are just perfect…there are matte plastic covers over the led lights, reducing its overall brightness. Now when i tested the speed of the USB 2.0, I tried copying 1.2 GB of music from my computer to a flash drive plugged in the hub, it wrote at a speed of roughly 5 MB/s. Doing the same thing but instead with a media file it copied at a rate of 6-7 MB/s. I repeated what I mentioned instead directly plugged into the computer USB port and found the same speeds. Therefore, the product should be of USB 2.0 quality, and remember the write speeds are limited depending on your computer so you shouldn’t base any speeds off my statistical data, this was just to show you whether this hub is really USB 2.0 (my computer ports are USB 2.0).
Ordered a bunch for the office, 9 to be …


Ordered a bunch for the office, 9 to be precise, before people kept struggling with there laptops filling every USB port with printers, mice & external keyboards & , now they just plug in 1 thing and there off and running, done & done ! If you want USB 2.0 speeds though you will need an external power cord

This is the greatest thing ever. I’m not a techno geek. However, I plug this into one port and now I can charge phone, tablet, etc. and plug in extra peripherials without getting cords all jammed up around my laptop.

$8.49
Added to wishlistRemoved from wishlist 0

$9.99
Added to wishlistRemoved from wishlist 0

$10.99
Added to wishlistRemoved from wishlist 0