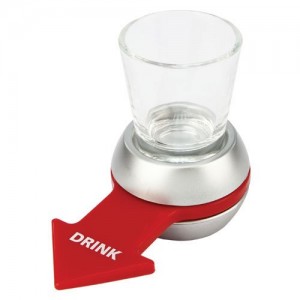 If you are young, young at heart or like me – have children in their twenties then we’ve found the gizmo for you.  The Barbuzzo spin the shot system.  Put a shot on top, spin the arrow, and well you know what happens after that.  Looks pretty cool and should be a lot of fun at a party or even as a conversation starter sitting on a shelf.

We’ve never tried it, but the reviews seem to tell us that it is a well-built little toy of enjoyment or destruction (depending on how long you use it).  Let’s get this party started!


For the record, I found this at the same ten dollar price at Kmart (though it came with a red arrow, not the black one pictured here), so this price is definitely right. This thing is a solid, heavy majigger that upon spinning, continues to spin for quite a few seconds. There are some sort of well lubed ball bearings inside here and the whole contraption is very well balanced (good Quality control) so it spins with ease. Plus it is rather heavy so it stays in place without fear of spilling the shot. I used this last new years eve and it supplied us with countless minutes of entertainment. Must have used it for a solid 10 minutes! But seriously, its always good for a quick bought of party fun when you just need to kick things up a notch, BAM! and then get back to the party. Highly recommended.
Great party game if you want to cry yourself to sleep


Ok, truthfully that didn’t happen. But it came close to tears when we played. We started off strong with around 10 people bunched around a table and by the end, only three were still playing. Mind you, there are no rules stating people must stop after one shot or anything. It was usually after four or five shots in quick succession where people started bowing out. But, we were able to get through two bottles of Jack Daniels. It was overall a big hit. Such a big hit in fact, that on the first night I brought it out, someone stole it. So if the possibility of multiple shots and possible theft sounds good to you, buy it now.

it works perfectly fine and it’s fun. It looks as pictured as well. Also, the shot doesn’t shake or anything when u spin it. Make sure you use on a flat surface

Added to wishlistRemoved from wishlist 0

Added to wishlistRemoved from wishlist 0

$4.69
Added to wishlistRemoved from wishlist 0